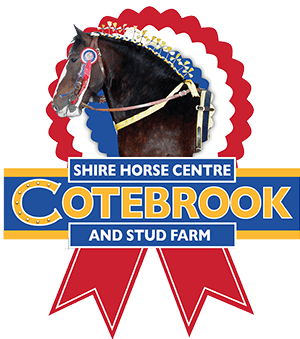 Cotebrook Shire Horse Centre In The Heart Of Cheshire

Moorfield Edward – An ambassador for the Shire breed 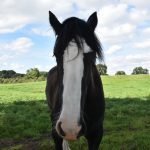 I first remember this great stallion when he was 2 years old. He stood 9th in his class at the National Championships at Peterborough, and Walton Supreme stood 6th that year. Isn’t it amazing how these two stallions have helped dominate our breed in recent years from such lowly positions?

In 1995 I visited Ray Williams at Shams Farm to try and buy a stallion or young colt from Ray. I was shown two colt foals suckling on their mothers, and one of them took my breath away. He was Moorfield Charles. He was, for me, the most talented young colt I had ever seen, a fantastic mover with three and a half white legs. I didn’t buy him that day as it took several months to negotiate a price I could afford. Whilst I was at Shams farm on that first occasion, Ray proudly showed me his other stallions, and of course he glowed with pride showing me Moorfield Edward, his favourite. I went and stood up close to him and without making too much ado I measured him. I noted that he was 2” higher than my eye line at his withers i.e. 18.2hh “How big is he?” asked Ray. “Big enough” I replied. “Tell me how big is he” was Rays demanding response. “18.2hh” I said. A welsh friend of Ray’s was present and he turned and said “Rubbish!” rather scathingly, “he is over 18.3hh”. I didn’t want to enter an argument – but I was correct!

Over the years I visited Shams Farm on many occasions and Moorfield Charles duly became my foundation stallion for nearly all my modern day bloodline. He was Moorfield Edwards Nephew.

Two great stallions from the 1970’s and 1980’s, Hillmoor Enterprise and Cubley Charlie, were both Edwards Grandfathers and they were the Great Grandfathers of Moorfield Charles. Ray and I became good friends and holidayed together on several occasions going to Scotland and Germany on several visits.

Edwards show career was good but not amazing. He won his class at the Spring Show on 3 occasions and stood Reserve Champion as a 4 year old in 1996. Edward qualified for HOYS on 4 occasions and won several Championships and many 1st prizes at County show level.

It was as a stock stallion that Edward really excelled. In Ray’s lifetime Edward won the William Hiles Stock Stallion award on 3 occasions. This coveted award is for the sire of the most winners at the National Shire Championships AND the Final of the Shire Horse of the Year.  After Ray passed away Edward was out of the country for 2 years and therefore did not qualify for the award of Super Premium Stallion, a position that he had held since the age of 6. On his return to this country Peter Williams, Ray’s son, asked if I would be happy to continue the stewardship of the great old lad in his latter years, joining his son Moorfield Ted who had already been at Cotebrook for 2 years. I jumped at the opportunity and with some considerable TLC Edward returned to good health and fitness, and regained his Super Premium Status. Whilst standing at Cotebrook Shire Horse Centre he regularly covered between 25 – 40 mares each year. Since 2010 when I judged the National Championships awarding his son Milnerfield Sir William Champion Stallion, Edward has sired 14 National Champions, 2 of them in USA, and most amazingly he has won the William Hiles trophy a further 6 times in the last 7 years, making it a total of NINE times he has won the prestigious Champion Stock Stallion award. The one year he didn’t win it he lost by one point to his son Manor Mac, and most years his sons Manor Mac and Moorfield Ted have been runners up to him. 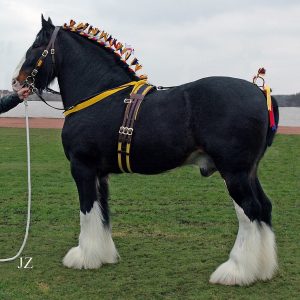 Last year after the mating season had finished Edward fractured the pedal bone in his off hind foot which required extensive treatment and ongoing abscess’s started in the same foot. We persevered with him but it wasn’t easy as with old age he became quite cantankerous and he wasn’t a willing patient. However he was always the perfect gentleman when being petted by our visitors both large and small. Over winter he really improved and went out occasionally in our home paddock but at the ripe old age of 24 he preferred his “armchair” which was his 20’ x 18’ stable. That’s where he felt safe and comfortable and could get pampered with his feed brought to him twice a day and a deep bed of shavings.

The National Championships in 2016 were for the first time at Bingley Hall Stafford. We showed on the Saturday and returned home that night. I was looking forward to loading up my filly Cotebrook Loch Anna early on the Sunday morning for the show and I had plans to take Edward as well hoping that he was going to win the Stock Stallion Award again for the 9th time. I was devastated to find that he had another abscess in that same foot and I had to leave him at home.

The following day Anna, his daughter was crowned Supreme Champion but I was much saddened not to be able to take the old lad that I had grown to love so much.

The 21st April saw the Queens 90th Birthday arrive and as she is the Patron of The Shire Horse Society we all celebrated at Cotebrook Shire Horse Centre by putting bunting all around the stable yard and I plaited Edward for the occasion and dressed him in his Show Harness. On his neck ribbon instead of a show number he had EDWARD IX. 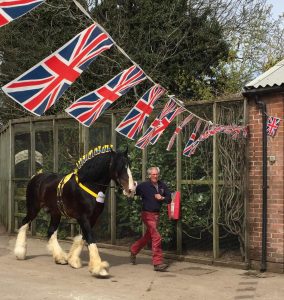 He looked a million dollars. He was as big and as fit as I have seen him since arriving in Cotebrook 6 years ago and when he paraded for the Queen, and our visitors, he trotted out with gusto. To say I was proud of him was an understatement.

He was photographed by everyone and I glowed with pride every time I got him out of his stable to talk about his many accomplishments. Children of all ages clamoured to stroke the gentle giant. He was the kindest most gentle horse ever both with the children and his many girlfriends when mating with them.

Just three days after the Queen’s birthday, on 24th April 2016, the fateful day arrived. Edward was brought out of his stable at 9.30am to mate a mare that had come all the way from Italy for his services. He successfully covered her and was led back to his stable. At 11.30- 12 noon I did my usual talk with him. He then went out into his field for a couple of hours in the sunshine. He came back onto the yard to meet his public again for another talk with me at 2 – 2.30pm and then I put him back in his “armchair”

Two hours later he was laid down and we tried to get him back up on his feet. He couldn’t. We called the vet and put him to sleep.

Rest in peace Edward. Farewell old friend. You were simply the best and hopefully you will continue to be so in the future through your many offspring. You have left us a fantastic legacy and were truly a great ambassador for the Shire breed.

The Latest News Straight To Your Inbox

Our all weather Visitor Walkways, enabling access further afield for all, are part funded by the European Agricultural Fund for Rural Development delivered by the Cheshire Leader Project